UK US and Australia Ambassadors’ Visit to Rara Lake

The COP26 Summit took place just a few months before. It was surprising that the ambassadors planned to visit Nepal to study the impact of climate change after such a quick time. It shows the dedication of countries to save the world as a whole. Seeing the photos uploaded by The US Embassy on Facebook, it is clear that the ambassadors had real fun and were welcomed by beautiful garlands and dance programs.

According to the reports, The CDO of Mugu District, Rom Bahadur Mahat, stated that it was the three Ambassadors’ private visit. The main purpose was to inquire with the locals about the complaints and the work done by the non-governmental organizations. Observing projects done by the NGOs will eventually inspire the organizations to work with more dedication and seriousness. Especially in the rural parts of Nepal, destined to be a great tourist area, the ambassador’s visit will eventually help.  After all, it’s all for the betterment. And Everyone believes together the minimization of the impact of climate change can make the world a better place.

The last time international ambassadors visited Rara was in 2011. Ambassadors from six different countries visited at that time. However, recently ambassadors from the US, UK and Australia visited Rara. Everyone hopes this visit would be a great move to control the climate change in the world. The amount of visitors Rara Lake has attracted over the past couple of years is astounding. The Ambassadors’ Visit to Rara Lake will also help Rara Lake to ve a broad recognition worldwide.

The US Ambassador Randy Berry, along with UK Ambassador and Australian Ambassador, visited Nepal’s gorgeous lake- Rara Lake. And what they said after their visit is a great testimonial for entire Nepal and the entire world. Every Nepali can stand with their heads up and be proud of what incredible beauty Nepal has. Nepal also tops off the chart in culture and traditions in terms of natural heritage.

Berry showed his affection and connection towards Nepal. He said that Nepal is his second country as he had spent the most time in Nepal with the US as his first. Randy even added that Nepalese and their cultures and traditions are the most remarkable things he has ever seen.

People from Nepal also go to Rara Lake. It has been established as one of Nepal’s most popular holiday destinations. Rara Lake Motorbike Tour is the most popular Rara Tour Package. It has gained immense popularity over the past couple of years.

Message from US Ambassador Randy Berry from the visit to Rara Lake, 2021

Randy Berry and ambassadors from the UK and Australia visited Rara Lake on November 15, 2021. The motive of the visit was to turn the whole world’s attention towards the impact of climate change. Ambassador Berry clarified that Nepal is rich in natural resources. Moreover, the commitment of Nepal’s government at COP26 would lead to nature’s betterment.

Berry said that despite Rara Lake being different in its landscape, ecosystem, and beauty. But it still brings him the sense of the entire world in it. As the whole world faces a crisis just like Rara Lake, he sees the world in it. He believes everyone who breathes in the world is responsible for helping make the world a better place. Sustainability is what we hope for, and sustainability is what we work for.

The US Ambassador has shown his support for Ecotourism. He believes it minimizes the negative environmental impacts of tourism. The negative impacts include garbage, bottled water, and excessive food waste. Amidst the impacts, Tourism can bring massive economic upliftment to the country. Ambassador Berry, Ambassador Volk and Ambassador Pollitt donated 3 solar panels to the Rara National Park. It was a move to promote Clean Energy in rural areas. PM Deuba referenced Clean Energy in the COP26. Berry showed his support that clean energy could be used as a vessel to store sustainable, consistent energy. It is all for combating the climate crisis.

He thanked everyone for following him in his journey and insisted on working more towards the environment and people.

The message of the ambassadors’ visit to Rara Lake symbolizes the need for the whole world’s attention towards conserving natural resources. Another motive that stands out is to minimize the impact of climate change. Global Warming is the most difficult issue that has surrounded the whole world in its darkness. Together the whole world needs to unite and fight the battles. Climate change is real, and it is the biggest threat to the entire species. He urges everyone who breathes in the world to step up and do the best they can. It’s not the time to sit down and procrastinate. It’s the time to work for the environment and make the world a better place to live. Living is better than surviving, Right?

Climate Change- The Biggest Threat to Animal Species and How the world is seeing it?

Many international celebrities are doing a wonderful job for the prosperity and sustainability of the earth. It is believed that when big influencers talk about some of the biggest issues, the people who follow them get good directions to working for the betterment. For instance, Leonardo DiCaprio, the famous American actor, is actively involved in conserving biodiversity. He has worked tremendously for the betterment of the environment. He won an Oscar after fifteen years for his movie The Revenant, and during his acceptance speech, he talked about the environment and Global Warming. That’s the level of dedication and work ethic we all need to have in our lives. What a  great man, Respect!

The Ambassadors’ Visit to Nepal’s Rara Lake is an ode to justify that the whole world is facing a crisis right now. Climate change has been a lousy factor that has halted the overall betterment of the environment. It is an urge to everyone to step up from their part and do whatever they can do to save the environment. The entire species is at stake, and it’s time to act. 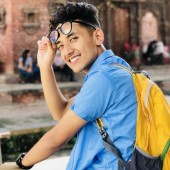 Hello, I am Anis. I am just a simple guy who loves writing content and movie reviews. Finding happiness in small things and adoring every moment of life is my forte. Seeing my favorite team win or my favorite fictional character doing wonders on screen, everything makes me happy. Talking about my work, I am actively involved in Web Development and SEO. "Success is not final, failure is not fatal. It's your courage to continue that counts." I am deeply influenced by this quote from Winston Churchill. I believe in putting my best effort into everything I do. It doesn't matter whether it's a video game or in life, I put my best foot forward. Have any queries, Ping me up. The social media links are attached somewhere around.

What is Luxury Trek in Nepal